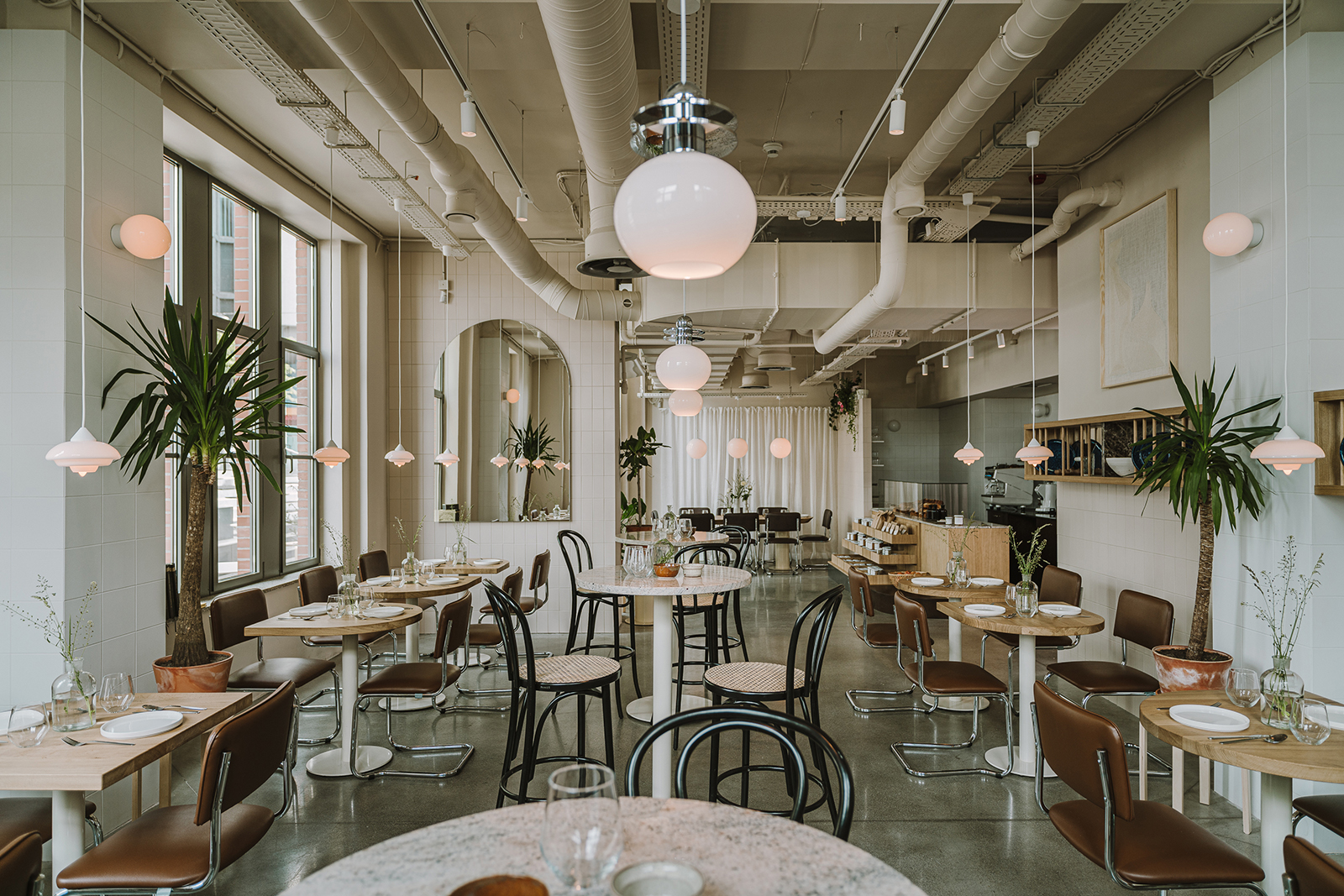 What was the starting point for the concept of Nadzieja?

Agnieszka: Israel. Ewelina knew that she wants to serve here food inspired by the Israeli cuisine. We were wondering how to make a reference to this in a modern way and within the restaurant space. We immediately came with ideas for colours, fabrics and bauhaus.

Ewelina: Just say that you were glad that it was nowherenear the design of the Polish People’s Republic times! (editorial note: A design that dominated the interior of the previous restaurant of Ewelina Je Sus). We completed the interior of Je Sus in two weeks spending 5000 PLN. Back then, we received plenty of stuff from our friends. This time, we had more time and funds. I also gave free rein to Agnieszka and did not intervene in her project.

Agnieszka: True, that’s how it was! I remember you said you want the interior to be like my woven pictures. I guess that what you had in mind was the softness of forms, neutral, bright colours – everything that characterises them. We agreed on the functional elements of the interior and we came to realise that we feel this space in the same way. It was only then that I started working on the project. 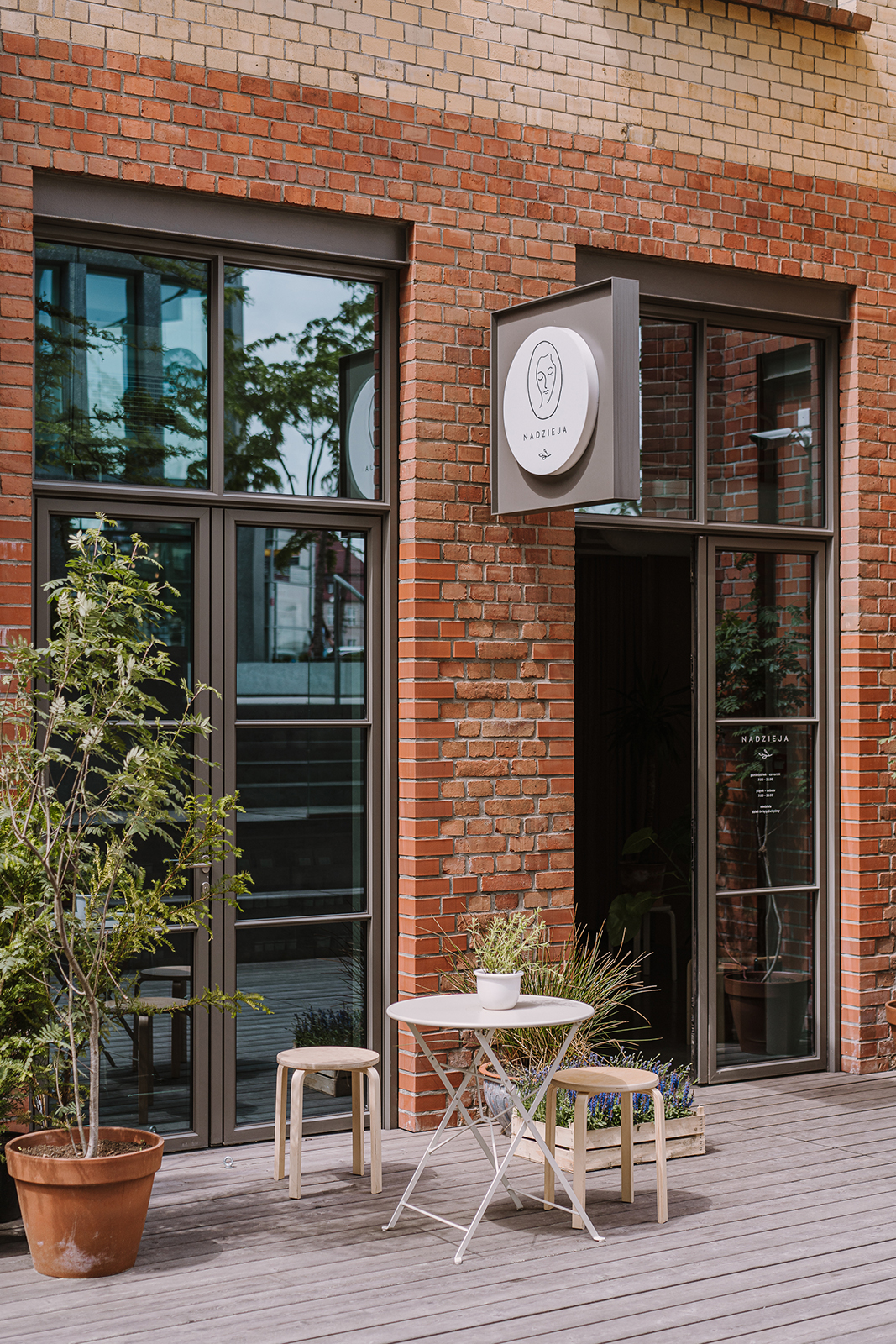 Did you know from the beginning that the restaurant will be named Nadzieja (Eng. Hope)?

Ewelina: I had many names in my head. I was also hesitating about keeping the name Je Sus, which at the time, was already a recognisable brand. However, when Ania Jęchorek (from Extra Studio) started designing  the logo, she created this feminine face which didn’t go with the name Je Sus. It was then that we came up with the name Nadzieje. There are still some people, though, who call us the new Je Sus.

One thing is for sure, this interior radiates with light – the walls, the tables are all bright and there are many lamps. Zenon restaurant, which used to be here, was rather dark. The building is located from the eastern side and, when you enter, you need to go downstairs like into a basement. How did you managed to achieve a space which is so full of light? 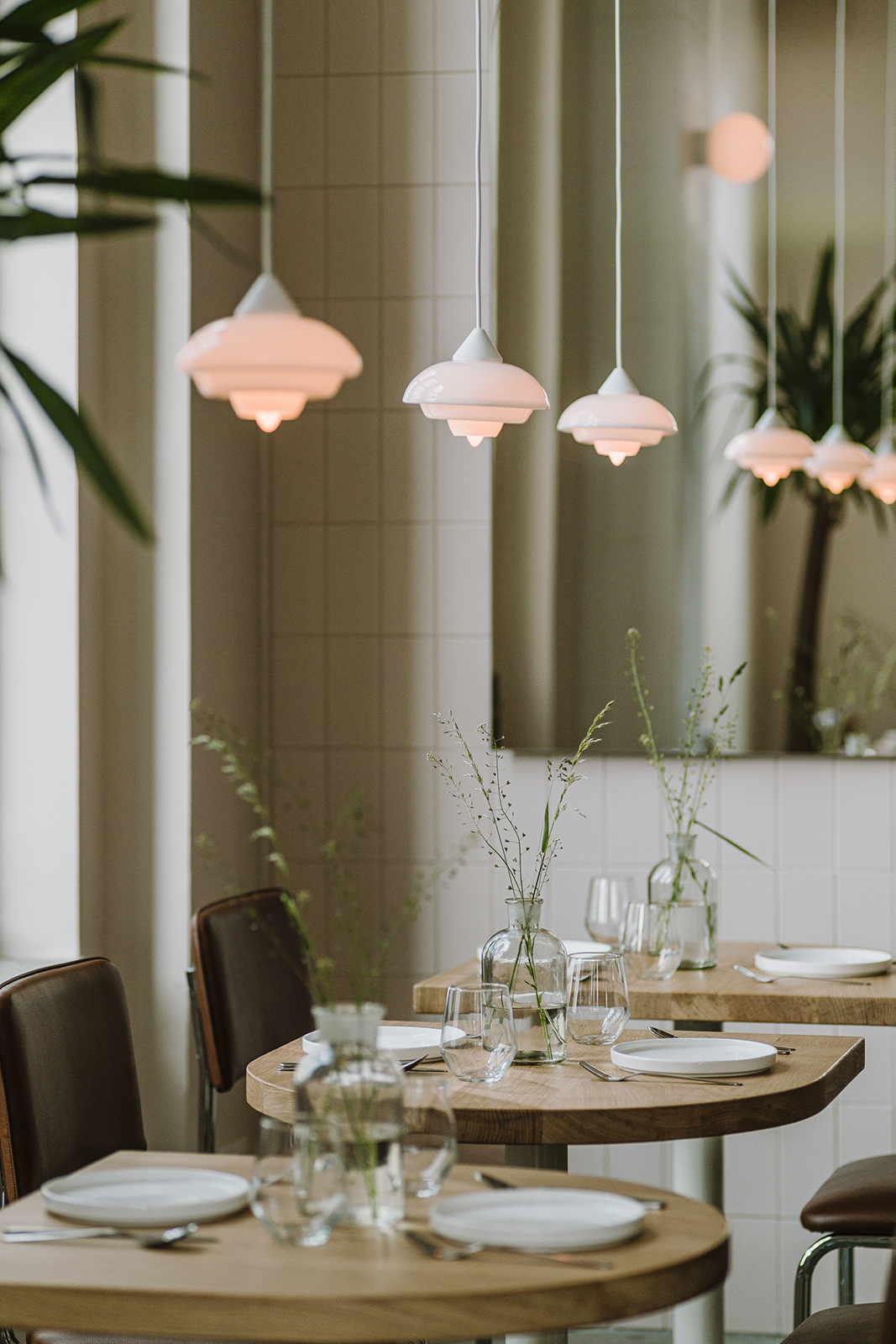 Agnieszka: Just as you said, first of all, the bright walls. We’ve been looking for the right shade of beige for a long time. In the morning and in the afternoon rays of sunshine sneak into the room and it makes the interior even more charming. The turning point for us was when the Zenon restaurant moved out. All the walls were then re-painted in white and the difference was just stunning. The interior immediately seemed twice as big. We realised that the space needs to be kept bright and that we were not going to build in anything. This is why the ceiling remained uncovered.

The restaurant is located in the Concordia Design building – a culture and business centre established here about 10 years ago. Do you know what used to be in this post-industrial building before?

Agnieszka: This building was an old printing house from the beginning of the 20th century. When I moved from Toruń to Poznań just before I started by studies, it was in a ruin and the ceiling was falling off. It was refurbished and now it is merged with the new Bałtyk building. Between them are a passage and wooden stairs which are integral elements of Nadzieja. Many guests like to sit there outside. In fact, it was the intention of the authors of Concordia to turn the square between the buildings into an animated, public space.

Your interventions are indeed subtle. You kept the floor unchanged, the ceiling is uncovered, the ceramic tiles are the same colour as the walls and fabrics. Only the furniture stand out strong. 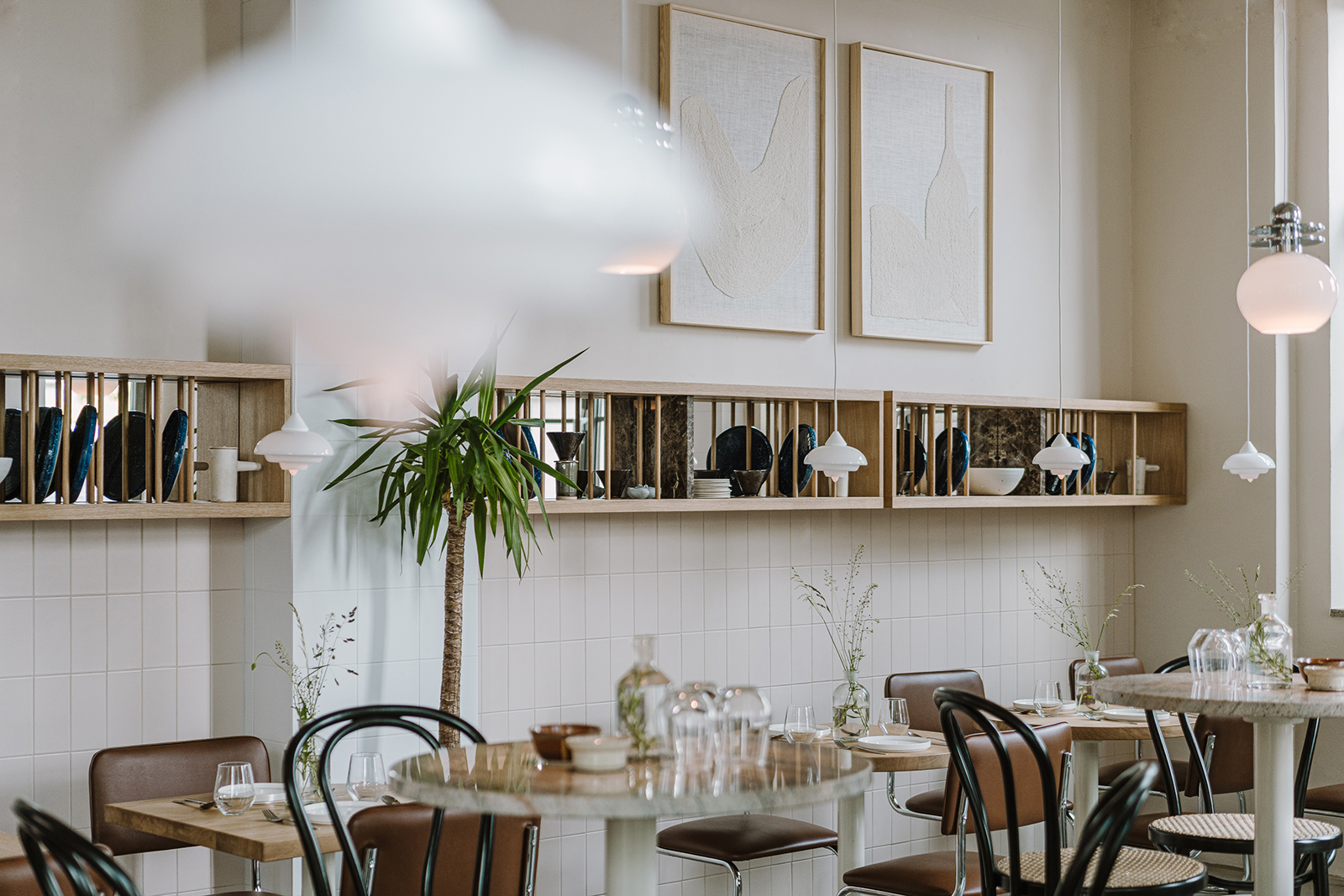 Agnieszka: The chairs are Sylwia design by the company Nowy Styl. Well, they are not so new anymore, as they must be 30 years old already. They make a nice reference to the Breurer designs. Their metal construction is reminiscent of the bauhaus style. I need to add that everything in this interior is made in Poland. The tables and the shelves on the walls were custom-made according to my design. The bar stools are from Fameg. The tapestries are made by me. The lightning is from Wrocław’s Chors, created according to my design. The white lampshades are from Pieniny Mountains Glassworks. We didn’t save on the lightning as it allows us to thoroughly transform the character of the interior, depending on our currents needs. We also have Polish ceramics – created in collaboration with Waterlove Studio from the School of Form. You can also buy this ceramics at our restaurant and take it home.

You also sell the crops from the eco farm that co-operates with the restaurant.

Ewelina: Yes, we have our own farm, we source fruits and vegetables from. If we have more than we can process, we sell them. The fact that we launched our own production of organic vegetables gives us the freedom to be 85% self-reliant. This is a one of a kind situation. I don’t think there are many other restaurants that serve this variety of ecologic food while still keeping an acceptable and pretty nice price level. Seasonality of the crops means that we are changing the entire menu with over 30 dishes every 3-4 weeks. In reality, we follow the cycle of the nature and the rythm of our crops. All our products come from Greater Poland region and we are proud of it. Well, except citruses and pistachios. Next year we are planning to extend the farm adding new greenhouses. We will be able thus to enlarge our cultivation and share our fruits with the citizens of Poznań.

In order to do that, you needed to set up a special counter and a little delicatessen exposition. I see you sell za’atar and other herbal spices.

Yes, initially, we thought we will need a chiller counter but it turned out it is not necessary. There is a glass counter, little shelves and baskets with fruits and vegetables. 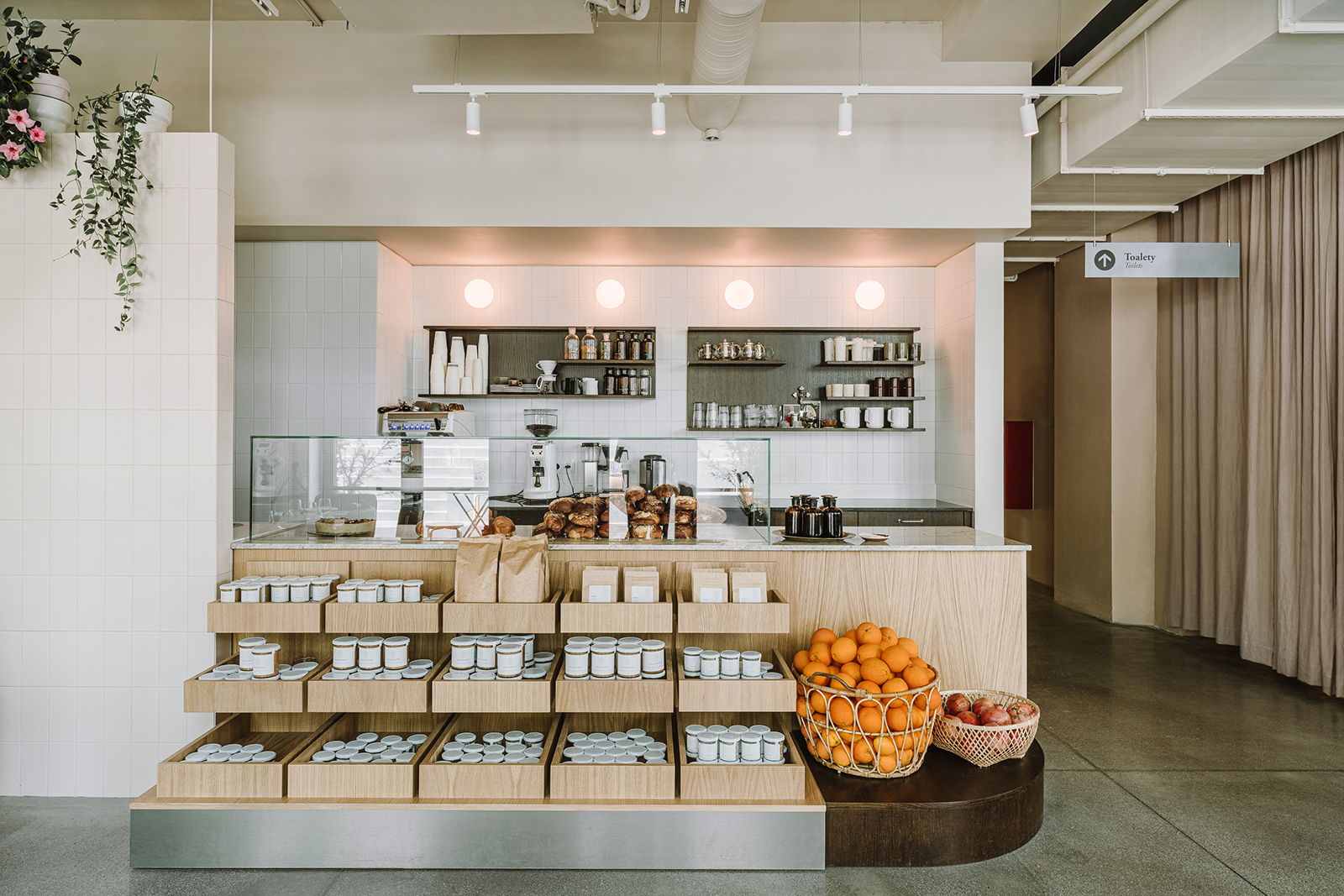 Were there any issues you didn’t agree on?

Agnieszka: In terms of the design, no, I don’t think so. Although the execution of the project is often a very turbulent time. People get nervous, there are problems with sub-contractors and keeping deadlines. This is all normal and afterwards, you take a rest and forget. The effect remains and I am sure it is very satisfactory for both of us. I am even more happy because this is my very first fully personal interior design project.

The guests love not only the interior, but the food as well. I cannot decide what is my favourite. In the menu there is shakshuka, hummus and the wonderful sweet challah with fruits and whipped cream which looks like a beautiful painting on a plate. The Isreali inspirations are very strong.

Ewelina: I have been fascinated with the Jewish cuisine since childhood. The menu at Nadzieja is actually a clash between the Jewish and the Polish cuisines. I love browsing old cookbooks which have plenty of fantastic vegetarian recipes. There are many dishes from Israel in the menu because this is my place on Earth and definitely world leader in vegetarian cuisine 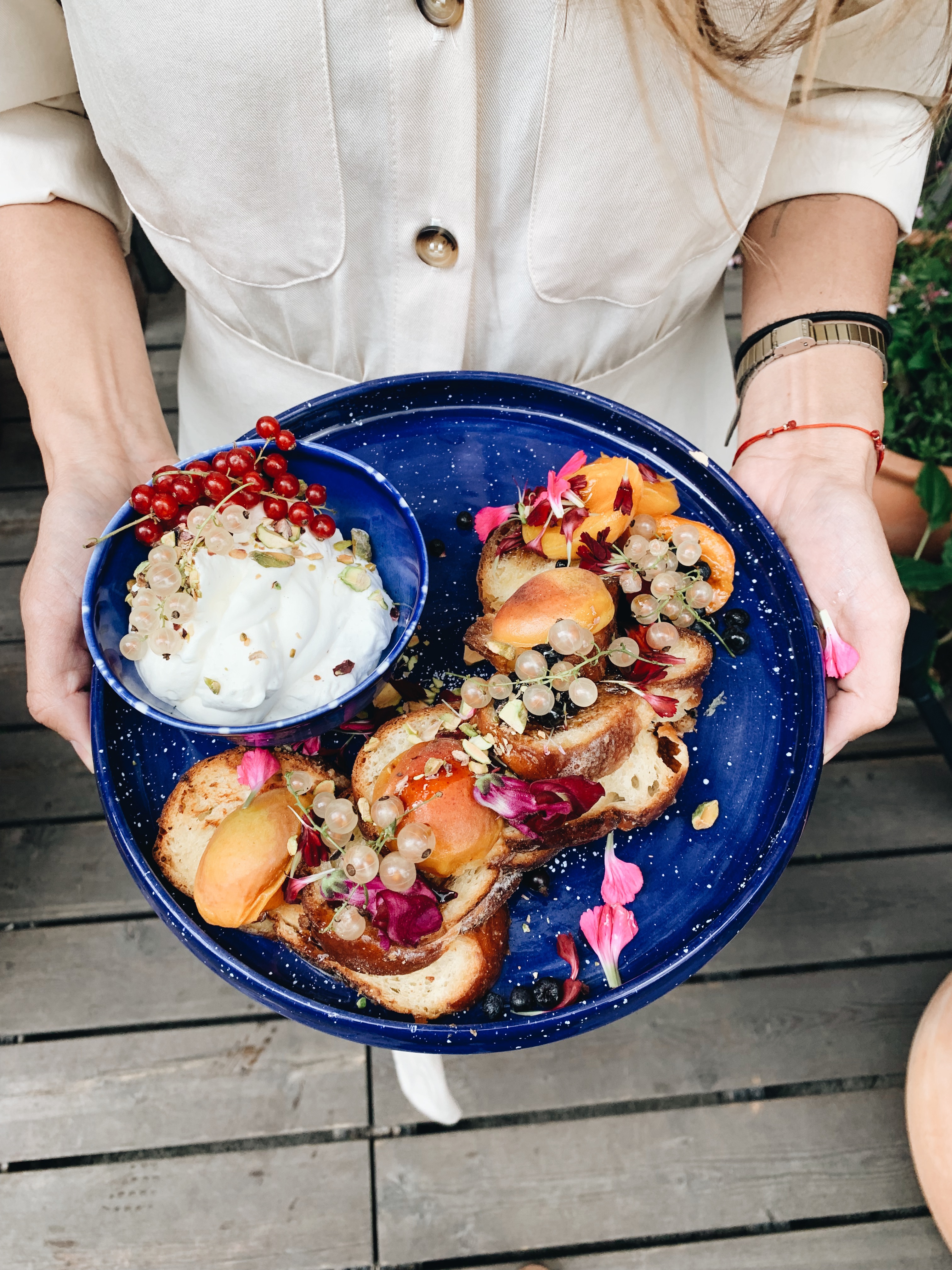 Agnieszka Owsiany  –  she has been living in Poznań for many years. She runs here her design studio, where she mostly works on interiors and objects. Apart from architecture, she also creates woven pictures, where she combines the traditional carpet manufacturing technique with original forms inspired by modernist design.

Ewelina Gracz – owner and main chef of the plant-based restaurant Nadzieja in Poznań. Vegan since adolescence. She has always been close to nature, forest and wild, edible plants. She spent her carefree childfood running around in the forests and meadows of the Land of 100 Lakes. It determined the way she cooks today. She only uses local and seasonal ingredients and tries long-forgotten vegetables and weeds in her recipes.