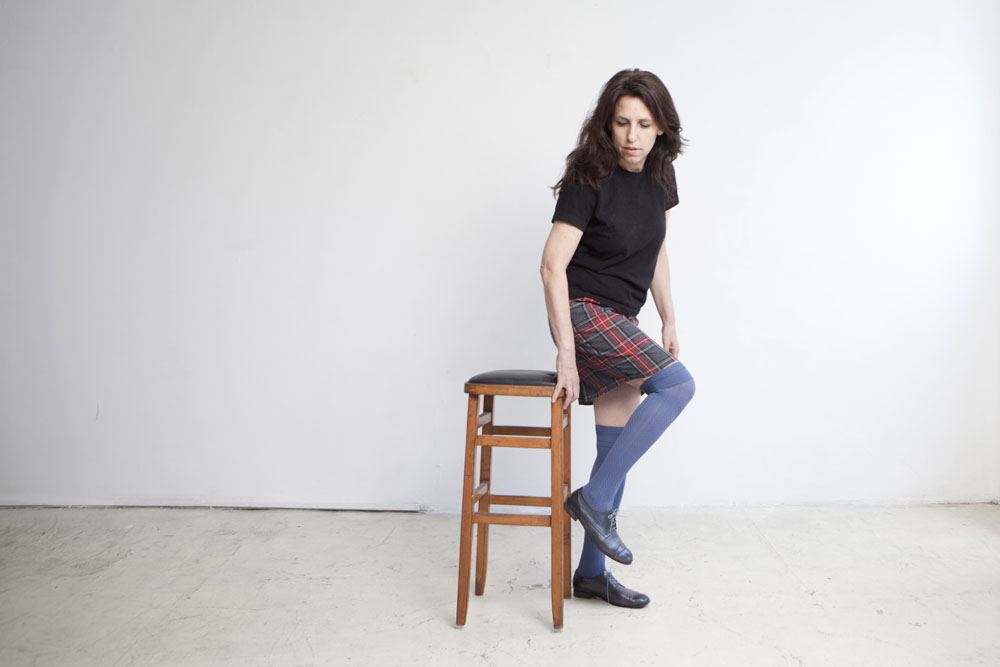 When I visited Tel Aviv for the first time, I went to a small bookstore on Shenkin street where I discovered her debut comics, entitled Exit Wounds. The illustrations were so expressive that I just had to buy it. Two years later, the book she wrote together with Etkar Keret appeared on the Polish market. Dad Runs Away with the Circus, is a story of a father who is so bored with everyday life that one day he decides to make his old wish come true and he runs away with the circus. The book is a thoroughly entertaining read for a tired parent who needs some evening relaxation. Four years later, I had an opportunity to meet Rutu in person. One of the scenes from The Property, Modan’s next book, inspired the organizers of Polish Culinary Week to arrange Polish dinner at Rutu’s best friend’s house, Lilian Baretto – an actress and wife of late Israeli dramatist Hanoch Levin. Rutu’s friend invited Mrs. Wanda Wrzeszcz, the owner of a legendary Warsaw restaurant Przysmak (Eng. Delicacy) on Lwowska street, to prepare her famous traditional pierogi (Polish dumplings), tomato soup and leniwe in . After the event we met in Rutu’s favourite bar.
So how was it?
It was super intensive. Three groups of guests in one day, all tables reserved and many people on waiting list hoping that someone will not come. And of course delicious Polish food. I was there with my sister, my best friend and my daughter, who is now 18. She enjoyed it a lot. Do you know what she said right after dinner? That now she understands what it means to be Polish. It’s amazing, don’t you think so?
Actually, it seems that you have Polish roots.

My mother’s parents were born in Warsaw. Both my grandmother and my great-grandmother lived on Sienna Street, and my grand father was born and raised
on Lwowska 7 [Mrs. Wanda’s bar in located at number 11]. My grandparents managed to escape from Poland in April of 1940. They were very lucky. Some time earlier, they had planned a holiday trip to America, so they already had visas. After the bombing of Warsaw, my grandmother told my grandfather to flee to Italy and wait for her in Trieste. She had to arrange visas for her children. So, she discovered that there was a German officer in Cracow, who could help her. She was a very smart woman. Family tale says that she hired an ambulance with a driver and managed to get to Cracow during the bombing. She got the visas for her children and they escaped before the ghetto was created.
What an incredible story.
But my great-grandfather died during the bombing of Warsaw. His son, my grandmother’s brother, buried his father in Jewish cemetery all by himself. At that time, it was so dangerous that no one wanted to help him. However, he didn’t find his father’s grave after the war. My grandmother never wanted to talk about Poland. This was too painful for her. They never wanted to come back to Poland either. So I avoided this topic. When my school organized a trip to Poland I refused, I didn’t want to go. But I would read Polish books… For instance, Kornel Makuszyński translated into Hebrew. I really enjoyed Satan from the 7th grade and Argument About Basia. I did know something about Poland, but not too much.

So what made you change your mind and come to Poland?
As I grew older, I started to think more about my roots and the past. Also, recenty the question of reclaiming Jewish lost property in Poland is very common. I don’t know if you discuss this issue in Poland as well?
Yes, definitely. Many Polish people lost their property after the Second World War, when communist authorities confiscated their estates. It happened to my grandmother..

When I started doing my research I heard about The Warsaw Uprising for the first time. I was shocked, I’ve never heard about it before. Here, people never mention it, but they tell many other war stories, especially the one about Ghetto Uprising. For me, it was particularly important to mention Warsaw Ghetto Uprising in the book.
You came to Poland on All Souls’ Day?

Yes, it was in October of 2010. Before departure, someone told me about this very special day when people lay flowers and candles on the graves of deceased family members and friends to remember their dearly departed. I wanted to see it. In Israel, we commemorate the deceased on the day on which they passed away. For me, there is something truly magical about All Souls’ Day. It is an amazing experience to go to cemetery with other people and visit famous people’s tombs, like these pilots…
Żwirko and Wigura?
Exactly. And I like reading the descriptions on the graves.
A visit to Powązki Cemetery plays a major role in your comics, actually the Polish title of your book is All Souls’ Day. You entitled the Israeli version Property. Why did you change the name and give it a different meaning?

Well, I wanted my comic book to be entitled Day of the Dead, but the publisher didn’t like it. Besides, one of Stephen King’s books has exactly the same title. In my opinion, Polish word Zaduszki (*eng. All Souls’ Day) sounds really beautiful. I like it a lot, but in Israel no one would understand its meaning. Property was my second choice.
What were your initial impressions of Warsaw?
The first time I went to Warsaw, I was with my younger sister. I purposely didn’t do Google Image because I thought it would be a nice opportunity, which is very rare in our time, to go somewhere that you don’t have an image before in your head. I didn’t want to see the Jewish ghetto, I wanted to discover Poland. Warsaw is great. Tel Aviv is completely different, but interestingly, both cities have something in common. I feel that they are somehow related. I can not explain what it is… Maybe a similar culture, traditions? I remember old shops from the 60s and 70s.

Did you also visit Mrs. Wanda’s bar on Lwowska Street?
I was trying to find characteristic places. Do you know this famous interview François Truffaut carried out with Hitchcock? The latter stated that when he directed, he would always try to create  very authentic scenery. I am similar. When I draw my comics, I always imagine every detail of each illustration. But I also like to surprise, to create things that are not so obvious. When I discovered that there is a restaurant in Warsaw in someone’s home I was intrigued and asked my guide to take me there. And imagine that my sister burst into tears the moment she started eating leniwe! For her, it was the flavour of our childhood. Our grandmother used to make leniwe for us. Until that day, I was sure she was the only person who knew how to make leniwe. And then I went to the restaurant on Lwowska Street. I believe that we will always remember the flavours of our childhood, they suddenly come back. It was my dad’s favourite dish. But we used to eat leniwe with salt..
With salt?
Yes. Today, when I visited Mrs. Wanda, I was told that only two percent of Polish people doesn’t eat leniwe with sugar. So my family belongs to this minority.
Przysmak restaurant also appears in your comics.
From the very beginning I was sure that Przysmak, similarly to Powązki Cemetery and Fotoplastikon, would play an important part in my story.
Another crucial dish you mention in Property is, of course, pierogi (Polish Dumplings). And you associate pierogi with love – in your cook you portray a boy in love serving pierogi to a girl.
Don’t laugh. Pierogi are very good.
Of course! I like them too. The Russian (potatoe and cheese version) and meat ones, Mrs. Wanda made today, were delicious!
Here, in Israel it is very rare. Polish restaurants serve horrible food! It is barely edible. Today, I was wondering why Polish cuisine has such a bad reputation in Israel.
Probably because of the poor quality of Polish restaurants.
They are quite old and don’t serve authentic dishes. So people who visit these places have wrong impression of Polish culinary tradition.
What about you – do you cook at home?
Both my grandmother and my mother make delicious food. My sisters also know how to cook. But I do not. I never had enough patience. And I worked too much. But I had to learn and I started cooking seven years ago, when we moved to Sheffield in England. My husband was doing his PhD, and there were no good restaurants, so we had to cook at home. There are so many good restaurants in Israel while there was no place to go in Sheffield. I am not a talented cook but I am still trying to improve my skills. I love Italian and Japanese cuisine. The first one, in perfect for the kids. Me, I have two children, so very often I make food especially for them. Their favourite dishes are, of course, pizza and pasta, but they also like meatballs that I prepare according to my grandmother’s Polish recipe. Children call them Mother’s meatballs. Of course, I don’t correct them. So as to Japanese cuisine, what I like about it is that it is fresh, light and innovative. Last year we went to Japan. I have dreamt about it since I was ten. I love Kyoto.
And what are your favourite spots in Tel Aviv?
Well, I don’t go out very often. I work at nights and then I spend the days with my children. My husband wakes up at 6 in the morning, so in the evening he is too weary to go out. I really like the place we are at now. It is on the corner of a busy street, so I can sit and observe so many things.
Joz V Loz is also very nice. It has a lovely small, hidden garden and fantastic food. But in my opinion, Orna and ella is actually the best cafe in the world – food is simply outstanding! Let’s take for example their fig brioche with Roquefort – it is an absolute must!
You mentioned one more Polish dish in Property – rosół (Eng.meat broth). It helps to survive bad times.
My husband makes a large pot of rosół every Friday. And he is so proud of it. He also makes it whenever someone is ill. He believes in its healing qualities.
Now I see why one of the characters in you comics, the grandmother, was given rosół. It gives a new lease of life.
Exactly!
How many times have you visited Poland? Only once?
No. I’ve been there already three times. First, I wanted to do my research, then I came as a guest of comics festiwal in Gdańsk and I also spent some time in Warsaw. After some time I went back to take photos of all the places and locations that I would need for the story.
I hope that next time you come to Poland we will manage to meet and have lunch on Lwowska Street.
With pleasure.

Rutu Modan – born in 1966, an Israeli illustrator, comic book and graphic novel artist, who received numerous awards for her children books illustrations. She lives in Tel Aviv. Both of her comics, Exit Wounds and Property, were published in Poland by Kultura Gniewu.