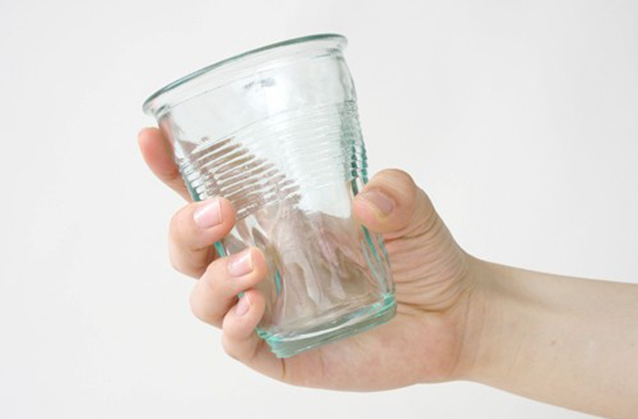 Thanks to the association that it’s a one-time use product, it became a refillable object of the everyday day life. Within time it also became an icon of the contemporary functional design. The world appreciated the brilliance in its simplicity, all above  the exceptional functionality and the ergonomics of the product, which being held in one’s hand, ‘fits like a glove’. The originator and the author of the ‘crumpled’ family is a Dutch artist, Rob Brandt ,who created the brand under his name. About his own style he says  his work neatly  balances between the art and the kitsch. The family ‘crumbled’ is made-up of snow-white ceramic small mugs in the Size of XL, the average one, and tiny one for espresso. The idea was conceived in Rob Brandt’s head  in 1975 and since then mugs are being produced in the unchanged shapes in Netherlands under the vigilant Rob’s eye. In 2011 the glasses made of recycled glass joined the family. The biggest and youngest one  (is being produced since 2011) of the ‘crumbled’ family’ is an impressing vase which can also serve as a cooler.